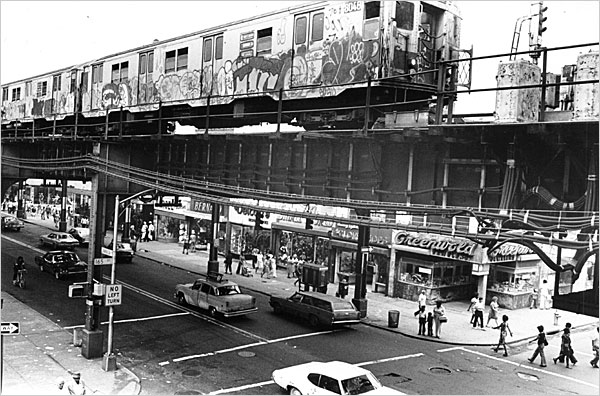 One of the newest items added to the The New-York Historical Society’s extensive collection is unconventional, to say the least. Surrounded by portraits of the city’s elite and scenes of the city’s colonial past, a worn wooden door used as a canvas for the signatures and tags of 1970s graffiti artists stands as an idiosyncratic reminder of one of New York City’s most troubling eras.

Due to the recent installation of the graffiti door at the N-YHS, my fellow researchers and I have been unable to find detailed research in the historical society’s records. However, a basic knowledge of the door is known through the curators of the museum, who informed us that the door belonged to famous graffiti photographer Jack Stewart. Jack Stewart was interested in studying the emergence of graffiti in the urban landscape of the 1970s; so much so that he decided to invite several teenage graffiti artists into his home to hone their skills on paper. However, those teens felt uncomfortable expressing their art directly onto paper, so he suggested they scribble their tags onto one of the doors in his home.

This graffiti door provides insight into one of New York City’s most turbulent eras. During the 1970s and 1980s, urban decay and high crime rates were prevalent throughout many urban centers across the United States. Graffiti as an art form emerged during this time period as well, leading many to associate graffiti as one of the main causes of urban decay during this time era. For this research project, I will specifically focus on the effects of graffiti in the urban landscape, and whether or not one should view graffiti as a either a cause or effect of increased levels of crime and disorder in the American city. I will also explore the “Broken  Window Theory”, which was a theory that has had a profound effect on public policy throughout the last three decades.  This theory promoted more extensive enforcement of misdemeanor crimes such as vandalism, in an attempt to deter criminals from committing more serious crimes. Recent studies have cast doubt on the effectiveness of the “Broken Window Theory” as a public policy tool, but it is still credited as one of the ways inner city crime has been reduced drastically during the 1990s.
I hope you’ve enjoyed reading my thoughts on this project. I’m planning to explore on the relationship between gentrification and graffiti for next week’s blog post. See you then.